WKKK in Cincinnati: Stoned and Spontaneous Thoughts on the Latest Trump Rally in Ohio

Listen to the Honky Toker Potcast on iTunes here
http://ruckusintherecords.com/ 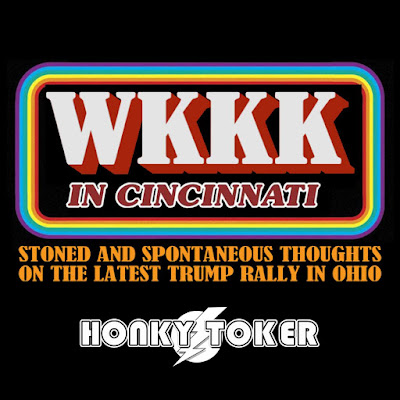 At this point in America, nobody is changing their mind. Everyone is all in: Pro-Trump or Anti-Trump. And it's not a choice. It's who each of us is (whether we like it or not), and we were this way before Trump was in office. It has nothing to do with being a Republican or Democrat and it isn't even (really) political.  The Trump presidency has drawn an ideological line in the sand, and each of us is firmly entrenched on one side or the other. And most of us have been right where we're planted since before Trump was a glimmer in Putin's eye.

I use the term "ideological" very loosely. I'm talking about Americans here. Ideologies are too complex for the masses and are really only understood by their controllers, who are only espousing or enacting what own puppet masters are directing them to say and do. It's no secret that most Americans have never read the Constitution or the Bill of Rights (except for the excerpts they were forced to digest by the compulsory school system) much less the Mueller Report's findings. If the average American votes--or even belongs to a political party--it's unlikely that they comprehend their party's platform besides a few key issues such as abortion or legalizing pot.

It's more accurate (and still a little generous) to say that Americans possess "worldviews" rather than ideologies. Basically people tend to vote for people they perceive to be the most like themselves. Never mind that the Republican base repeatedly unwittingly supports a tax system that favors the elite and has stuck them in a state of generational poverty (which they blame Democrats and immigrants for). As long as the Right continues championing guns and prayer and packages it as a Kid Rock-contrived view of "patriotism" their base ain't goin' nowhere. Also overlook the fact that the fucking wall was an idea the Democrats were championing before Trump took office and their warmongering is way worse than the Republicans; including Obama's drone strikes and bombing of civilians, it's never mentioned in Stephen Colbert's monologues--or even by Michael Moore...anymore.  Needless to say the divide is not about policy and it's not new. But now it has a face: the one-man Mount Rushmore that is Donald J. Trump.

Trump is Archie Bunker incarnate, stubborn, belligerent, intolerant, ignorant...and, yeah, racist (and I'm not just saying that because I "disagree" with him). Like Archie, Trump has become the armchair apostle to the white working class and social conservatives, giving validation to every angry living room tirade somebody's right wing step dad has when he's a six pack in after a shitty day of work and a half an hour of Hannity.  Except this Archie Bunker reboot lacks one thing the original possessed in spite of his shortcomings: an established, if imperfect, sense of moral decency.
If prison is "college for criminals," can you imagine what 15 years of working in network television taught Trump? He knows his demographic. Intimately. Maybe even better than it knows itself (thanks to the data funnel of the internet). The Trump movement came prepackaged, just like the music, movies and news Americans inhale daily, whether it's deliberate or second-hand while Fox News plays in the corner of the oil change waiting room or insipid pop music pours out of the speakers in between commercials at the local brew pub. Simplistic slogan after simplistic slogan on repeat: 'Make America Great Again," "Fake News," "Build the Wall," which have served to dumb down the American lexicon even more. Repeating the same thing over and over again (repeatedly) won't convince everyone it's true, but it will definitely convince everyone it's a problem or a priority. 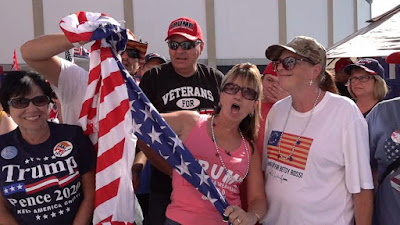 The irony of Archie Bunker and the people who embraced him (including reportedly Richard Nixon), is that he was played by a liberal ex-English teacher, Caroll O'Connor, and was intended to be caricature instead of an icon. But once people buy-in to an icon (even if it's one they've elevated in their own mind), admitting it represents anything other than they think it does is tantamount to discovering that they don't don't know themselves. That's not going to happen. Admitting that icon or the belief in it is wrong...that's never going to happen. Not even the most devout Donald Trump disciple thinks the guy is perfect. Most of his supporters would probably feel like kicking his ass if they had to spend a few days around him. He's not like them. Most of them know that. But they also know the most fundamental thing that Trump also understands: they might not like or agree with Trump as a person or a politician, but they fucking hate the people that fucking hate Donald Trump.

So here we are, on Presidential Apprentice season three, and it's about to get real obvious how the majority of Americans really think. Trump is packing stadiums. Not because the attendees expect him to say anything different than he's been saying for the last three years, but because he's saying the same thing he's been saying for the last three years. Don't expect them to come to their senses. And don't expect them to give a damn about fairness or decency when it comes to defeating their opponents. They're willing to overlook a hell of a lot to feel like they don't have to look over their shoulders. And the same can be said for those who are Anti-Trump.