Listen to the HONKY TOKER POTCAST
As part of Honky Toker's quest to Make America Cosmic Again, I present to you this entirely subjective list of 50 Essential Albums for attaining higher country music consciousness. 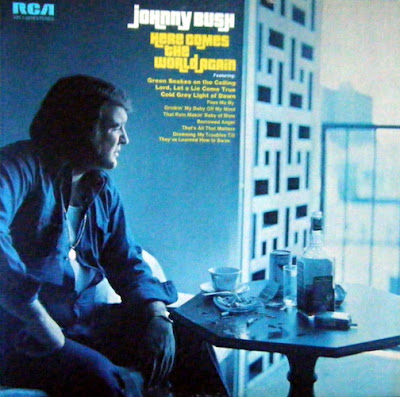 Johnny Bush Here Comes the World Again ('73)
The "Country Caruso," Johnny Bush, came up as a member of Ray Price's Cherokee Cowboys before embarking on a solo career that was intermittently successful but fraught with setbacks. In the early 70's Bush began a promising partnership with RCA Records, charting the self-penned "Whiskey River," which Willie Nelson made into an outlaw anthem. Unfortunately, Bush began experiencing vocal problems (which he attributed to God punishing him for his sins), developed stage fright and became dependent on drugs. Needless to say, his career suffered as a result and he was dropped from RCA after releasing three albums (all in 1973!) that under-performed commercially.
Here Comes the World Again mixes Bush's twin specialties, honky tonk and western swing, and stays in the hard country pocket throughout--neither catering to the Nashville sound's pop proclivities or the outlaw scene's rock and roll influence--which makes the album an anomaly for its era. But Bush's distinctive voice, penchant for songs soaked in booze and misery and his band's ability--propelled by the incredible steel playing of Weldon Myrick--to push the Ray Price Beat to the limit (and not to mention his friendship with Willie) gave Bush counter-culture credentials.
"Green Snakes On the Ceiling" (cited by Bush as the one song he hates) and the title track were minor hits, but were a bit too dark and odd to truly hit the mainstream. Still, the haunting tone of Bush's voice and the quality of the performances on them and album cuts "Cold Grey Light of Dawn" and "Lord, Let a Lie Come True" secured a place for him in the hearts of genre aficionados, and he's been able to establish a legacy in Texas. Here Comes the World Again is Johnny Bush in peak artistic form and on the cusp of personal disaster, which a perfect reflection of the maudlin carnival of the honky tonk life. It's not a pleasant trip, but it's a trip worth taking.