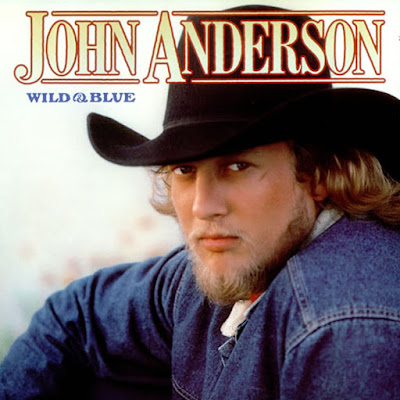 John Anderson is part of the first wave of country music's neo-traditionalists (alongside Keith Whitley, Earl Thomas Conley and Vern Gosdin), a promising movement in the pre-Garth era that brought back country's honky tonk roots but repackaged them enough to appeal to rock (or at least Southern rock) fans.
It was a shot of authenticity when country music needed it the most (if you don't factor in the present day), offering an alternative to the schmaltzy Kenny Rogers or the tepid Barbara Mandrell.
Wild & Blue, like the two excellent albums that preceded it, is straight barroom country--fiddles and steel guitar at the forefront (with the occasional embarrassing orchestral flourish), and Anderson's nasal honky tonk drawl bending all over the place. A couple of high-profile cameos appear courtesy of Merle Haggard and Emmylou Harris, but the high(est)lights are "Goin' Down Hill," "A Honky Tonk Saturday Night" and the two number one hits, "Swingin'" and the title track. John Anderson has never made a bad record--and he's made plenty of excellent ones--but Wild & Blue is arguably his best.