Honky Toker's 50 Essentials: #43 Jean Shepard "Heart, We Did All That We Could"

Listen to the HONKY TOKER POTCAST

In Honky Toker's quest to Make America Cosmic Again, I present to you this entirely subjective list of 50 Essential Recordings for attaining higher country music consciousness.

Jean Shepard Heart, We Did All That We Could ('67) 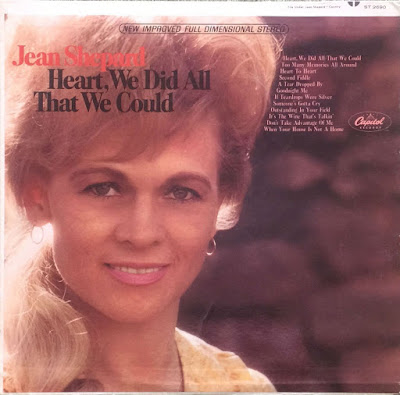 One of the greatest female vocalists to ever stand in front of wood paneling and sing, Jean Shepard and had a slew of hits throughout the 50's, 60's and 70's singing West Coast honky tonk--as well as owning the distinction of making country music's first concept album, Songs of a Love Affair in 1956. Heart, We Did All That We Could was released in 1967, but included some of Shepard's hits from 1964-1966; assembled as albums often were back then, to compliment (or "pad") new material.
Due to the fact that these recordings all came from Capital Records' studios, there's not a noticeable difference  in the sound of the material spanning the four years this LP collects. The title track stands apart though, featuring fuzzy psychedelic guitar, but still pairing nicely with the honky-noir of Shepard's lovelorn voice and the songs' icy arrangements.
Jean Shepard's recordings for Capital alone should afford her the same respect and recognition as Loretta Lynn and Tammy Wynette (though she was enshrined in the Country Music Hall of Fame), but sadly the quality of her talent often goes unrecognized. Shepard was also an outspoken critic of "pop" country--going back to the 70's--which is only further justification for her status as a Honky Toker Heroine. Get high, put on "Heart, We Did All That We Could," and get lost in the melancholy.