Listen to the HONKY TOKER POTCAST
In Honky Toker's quest to Make America Cosmic Again, I present to you this completely subjective list of 50 Essential Recordings for attaining higher country music consciousness.
James Talley Tryin' Like the Devil ('76) 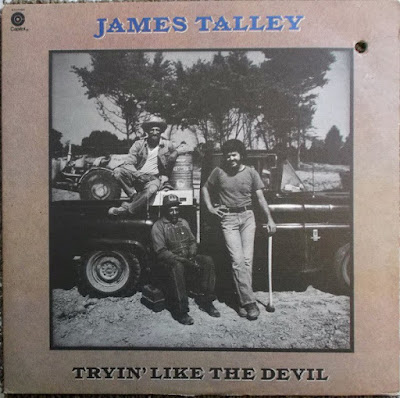 James Talley stood out among the scores of singer-songwriters in the Seventies (even among the scores of good ones), closer in spirit to Woody Guthrie than Guy Clark or Kris Kristofferson. More often than not the protagonists of his songs are struggling more to pay their bills than with anything existential, and the music reflects that, staying acoustic, simple and earthy without smoothing out the rough edges.
"You Can't Ever Tell" and "Are They Gonna Makes Us Outlaws Again" (covered by both Jimmy Rabbitt and Hazel Dickens) are about as kickin' as the album gets, but it's the quieter moments like "Deep Country Blues" and "Nothin' But the Blues'" that are the album's best, mingling folk, bluegrass and (yeah) blues like gentle Southern crosswinds.
All four albums Talley made for Capital Records in the 70's are excellent and any of them you can find should be procured, but Tryin' Like the Devil is both his rawest and most fully-realized work, where his songs sound the barest and the warmest. As the decade progressed Talley gravitated toward electric blues with Southern funk taking the place of urban folk, and Tryin' Like the Devil was last time country dominated his sound--propelled by the stellar fiddle work of Johnny Gimble. Waylon, Willie and Haggard were all in top form in the 70's, but James Talley was making music that was right up there with them in quality and vision--here's your proof.