Listen to the Honky Toker POTCAST
In Honky Toker's quest to Make America Cosmic Again, I present to you this list of 50 Essential Recordings for attaining higher country music consciousness.
Lee Hazelwood Cowboy in Sweden ('70) 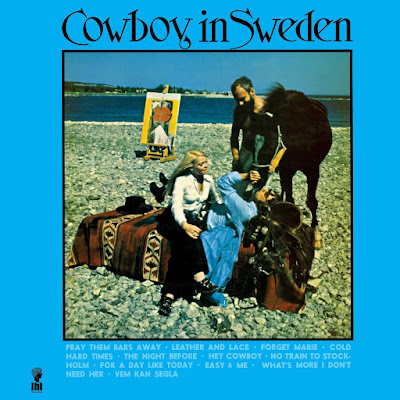 Lee Hazelwood was an outsider on the inside--a singer, songwriter and producer who collaborated with Duane Eddy, Waylon Jennings, Dean Martin, Gram Parsons and, most famously, Nancy Sinatra, but who also made his own often morose and usually psychedelic blend of AM pop and country and western music that never caught on in the mainstream. Cowboy in Sweden came almost immediately after Hazelwood moved to Stockholm, and was the soundtrack to a Swedish television special of the same name.
The hour-long film is as strange as the music it contains, replete with surreal sequences and frosted over montages that were rampant in 70's cinematography--kind of like a soap opera directed by Nick Cave. There's no discernible "plot," and if there's a specific artistic statement being made, it gets lost before it gets started. Still, the songs are weirdly magnificent; a bizarre blend of elevator music, psychedelia, country and western--even further out than Porter Wagoner at his weirdest or Johnny Paycheck's Little Darlin' sides.
Cowboy in Sweden comes off like easy listening with its department store horns, fairy flutes and schmaltzy duets, but it's musically and emotionally intricate, like Mickey Newbury's 'Frisco Mabel Joy or Beck's Sea Changes. Best listened to stoned and alone late at night--if your consciousness can take it.