Listen to the HONKY TOKER POTCAST
As part of Honky Toker's quest to Make America Cosmic Again, I present to you this entirely subjective list of 50 essential albums for attaining higher country music consciousness. I'm not aiming to rank the "best" or most "influential" country music recordings of all time, this Top 50 caters to a different set of criteria: basically amounting to my favorite country records to get high to. I restricted myself to including only one album per artist (to avoid having Merle Haggard's catalog comprising half this list), and it only covers recordings spanning 1967-1987--so don't freak out that there's nothing by Hank Williams on this list. But I'm sure there's plenty else about it that will confuse and frustrate people (at least the type of people that take the time to read these exercises in self-indulgence and futility). 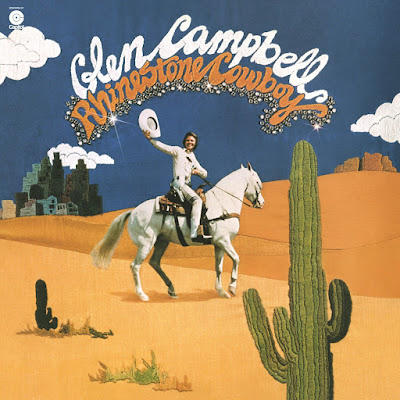 Glen Campbell played for Elvis, Merle Haggard, Frank Sinatra, the Beach Boys and fronted a bluegrass band before he began cutting his own records in the late 60's. All of his aforementioned endeavors no doubt had a significant influence on Campbell's sound, which combined corn-fed country, glossy pop and layered musical arrangements somewhere between Phil Spector and Billy Sherrill with his impeccably smooth voice.
Though he had already won Grammy's, hosted a television show and co-starred in True Grit with John Wayne, it wasn't until 1975's "Rhinestone Cowboy" that he achieved a number one hit. But just as his fame and artistic prowess was reaching its zenith, so was Campbell's drinking and drugging. Thus, under all the glitter and polish of Rhinestone Cowboy are songs that express melancholy and isolation, particularly on the album's lead track "Country Boy,"  "I Miss You Tonight" and "I'd Build A Bridge". Though all of his early Capital albums possess moments of brilliance, Rhinestone Cowboy is his most consistent collection and stands on the cusp of perfection. Were it not for the inclusion of his cover of "My Girl" (which isn't bad, but is definitely out of place on this album).
Merle Haggard once remarked that if God gave one human being too much talent, it was Glen Campbell; and that's an assertion that can be backed up by Glen Campbell's body of work--in addition to his prodigious musicianship and gift as an arranger. It's unlikely we'll ever encounter another talent in country music that equals Glen Campbell's again, and Rhinestone Cowboy is the best testament of his eclectic and conflicted genius